Walt Disney World unveiled the full fire power of their fully operational battlest…umm, theme park ride? Disney converted the iconic Spaceship Earth to celebrate the opening of the first stand alone Star Wars Story-Rogue One. The film opens December 16th and Disney is pulling out all the stops for the new film. 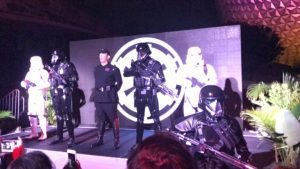 More characters and scenes from upcoming films soon will be incorporated into the park’s everyday lineup in addition to the “Star Wars”-inspired land currently under construction there.

Disney also announced that it would be doubling up on the nighttime spectaculars at Hollywood Studios. From Dec. 16 to Dec. 31, the park will put on the new holiday show “Jingle Bell, Jingle Bam,” as well as “Star Wars: A Galactic Spectacular,” which debuted earlier this year. Both shows revolve around digital projections onto the park’s Chinese Theater.

Star Tours will also be bringing back random sequences from all over the Star Wars galaxy beginning December 16th. You’ll be able to travel to Jaku and many other places in the Star Wars saga. Also in 2017, guests will be able to see a new mission from Episode 8. 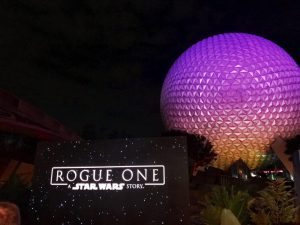 Photo courtesy of behind the thrills

For those who love Star Wars, and can’t eat enough, Disney will offer a seven hour tour. You’ll be able to team up with a Star Wars super guide and get an amazing all day tour including tons of information, Star Wars themed food, access to Star Tours, Launch Bay and reserved seating for the Star Wars shows. It’s for the ultimate Star Wars fan. That will be available very soon.

“it will be a Star Wars dream for fans”

The 10 BIG Updates From the Orlando Theme Parks

A View to the New Pandora: The World...

12 Mickey and Minnie Mouse Facts That Will...

5 Reasons To Take a Family Vacation